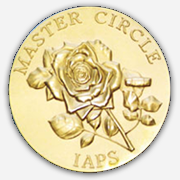 The IAPS Master Circle was created to honor those artists whose work has been accepted and/or given awards in IAPS Juried Exhibitions. Artists who receive the Master Circle designation may use the letters "IAPS/MC" on resumes, websites, brochures, magazine articles and other media to indicate their membership in the Master Circle.

To receive the Master Circle designation, artists must accrue five (5) points.
Points may be obtained as follows:


Each recipient of the award receives a three-inch medallion engraved with his or her name and the year the honor was bestowed engraved on the back. The design of the medallion was created by IAPS founder and President Emerita, Urania Christy Tarbet. "It is of a rose with a pastel stick next to it. The rose represents the resurgence of spring, as pastel is in its Renaissance period, and is now being recognized as a wonderful medium after being in the dark for so long. I wanted something very special that had never been done in the art world before, to honor pastel artists whose work was accepted in our exhibitions or awarded prizes. It is important for the recipients to cherish this symbol of excellence. It can be worn at IAPS exhibitions and conventions, and readily identifies IAPS artists who have received one of the most important honors in the pastel world."

2019 Recipients of the IAPS Master Circle Award
Only IAPS Juried Exhibitions accrue points; acceptance or awards in a member society's exhibition does not count towards Master Circle or Eminent Pastelist status. Other eligible IAPS competitions have in the past included IAPS Convention Catalogue Cover Contests, the 2009 Calendar competition and the 2011 Poster Competition.

Recipients of the Master Circle Medallion are encouraged to bring it with them to each convention to be worn at the Saturday Night Banquet.

The year in which each artist was awarded the medallion is shown after the name; an asterisk* indicates the artist is deceased.